Saturday 7th August
Carol and I set off from home at 8.30 and drove to Lancaster services. We stocked up on supplies at M&S and had a caffeine hit.
Some time later we arrived at Ennerdale Water, having eaten a picnic just after Kirkland. With the benefit of hindsight from my previous trip in May with Chris, we parked up on the roadside next to the footpath, thus cutting out a slog up the road with heavy rucksacks. We set off promptly along the footpath which seemed even more overgrown just 3 months later. Thanks to my email to the council, the bush that had blocked the path entirely had been removed, entirely. However a bit further along, a huge branch had come down but it was easy to get past it so not sure another email is required, there are probably more important things that need sorting out.
C had not got the gaiters on and it was damp underfoot, so I went back to the car and all was fine. These were very necessary as what had been desperately dry in May was now quite the reverse. We plodded slowly and steadily and took about 2 hours to reach the tarn. It is such a beautiful spot and so easy to reach. We’d both been worried that someone else would have got a pitch there before us but we were in luck and we saw no-one after a small group right at the start of the walk.
First job was to dig the latrines, job done efficiently with the iPood trowel, only 99g. We got the tent up very quickly, and made it nice and cosy, this time karrimats, then self inflating mattresses then sleeping bags. C located various stones which we used for the stove, our cups etc. We had a cup of tea and a look at our surroundings. Floutern Tarn is such a good spot for doing the wild camping. We pretty much camped in the same spot that CH and I had done in May, we couldn’t find anything flatter so there was a small slope.
I started to cook the dinner, and the minute I did we were subject to a very heavy shower so I heated up the Bombay potatoes (starter) in the rain while C languished in the tent. I didn’t actually mind at all being ensconsed in my waterproofs. For the main course, I served chilli con carne with lime and coriander rice. This was great too and C provided some buttered bread. The rain had stopped so we sat out on the rocks to eat our dinner and admire the view.
After washing up, we looked at the view again and then got in the tent as we were getting bitten although the insect repelling fabric did work fairly well. I tied mine round my neck and the wee beasties stayed away from my head at least. We did some crosswords by headlamp and drank whisky and sherry. It was remarkably warm in the tent. When we did eventually go to bed, I found I was very hot and threw everything off, such a contrast with my previous experience in this same place. We slept quite well although the next mission is to find a way to stop the sleeping bags slipping off the blow up mats. We did also slide down the tent as we hadn’t found a totally flat spot. I don’t think there was one to find.

Sunday 8th August
We woke up about 7ish, having slept surprisingly well. Looking out of the tent, I couldn’t see anything at all as we were in such thick mist. It had started to lift a bit by the first cup of tea/coffee. We breakfasted, C on Weetabix and me on muesli and yoghurt. Then to pack up. This does seem to take a long time and we didn’t get walking until 11.00 despite being a smoothly oiled machine.
We got back to the car quite quickly as our packs were much lighter and it’s down all the way. We then drove round to a car park near the western shore of Ennerdale Water and walked with our lunches to the beach to eat. This was very private but as the water was a lot higher, there was a lot less beach.
We strolled around a bit of the lake and then did a small diversion to get back to the car park. C was all for swimming in the lake and I was all for climbing up to the Pinnacles. We agreed to come back and do these things although these would be separate activities as there is no way I am swimming in the lake. Wild camping fine, wild swimming is not for me!
We got back in the car, drove up and around the top of the area along the A66 and then dropped down to Patterdale. Our B&B was Deepdale Hall and was set off the road. It’s a nice old farmhouse but we weren’t sure in the long run whether it really deserved its 4 stars. 3 stars yes. We got in and I had first dibs in the shower, lovely to get clean as I had managed to get really grubby! We both got ourselves presentable. I had to go and ask a man downstairs not to play his music as it was disturbing us. C had a good go on this one! He stopped immediately although he did seem a bit on the surly side. I worked out later he was the son of the household which consisted of father Chris aged 58, son Jimmy about 30 with wife Robyn and the twin girls. The man playing the music turned out to be Jimmy.
Time for dinner so we drove to the White Lion in Patterdale. We sat next to a couple from Nuneaton who entertained us whilst we waited for dinner. The man was an inveterate liar but this wasn’t totally terrible as he kept digging himself in. They’d both done the C2C several times. Pub grub, C had steak pie and chips and I had vegetable risotto and salad. Not much rice in the risotto and very greasy but quite filling.
Back to Deepdale and we settled in with some very strong wine that just appeared magically out of my suitcase. Nice to have a book to read, I managed to find where I’d stopped in Sarah Waters’ Little Stranger. Harder than it sounds, I’d got the book free as a download but it came in 2 x 3 or 4 hour files, so every time I  did anything else with the iPod like change a playlist, it meant I had to start again at the beginning. This was so annoying I’m surprised I managed to get through having half the book read to me. A treat then to have a real book to hold and turn the pages, also much quicker than being read to. 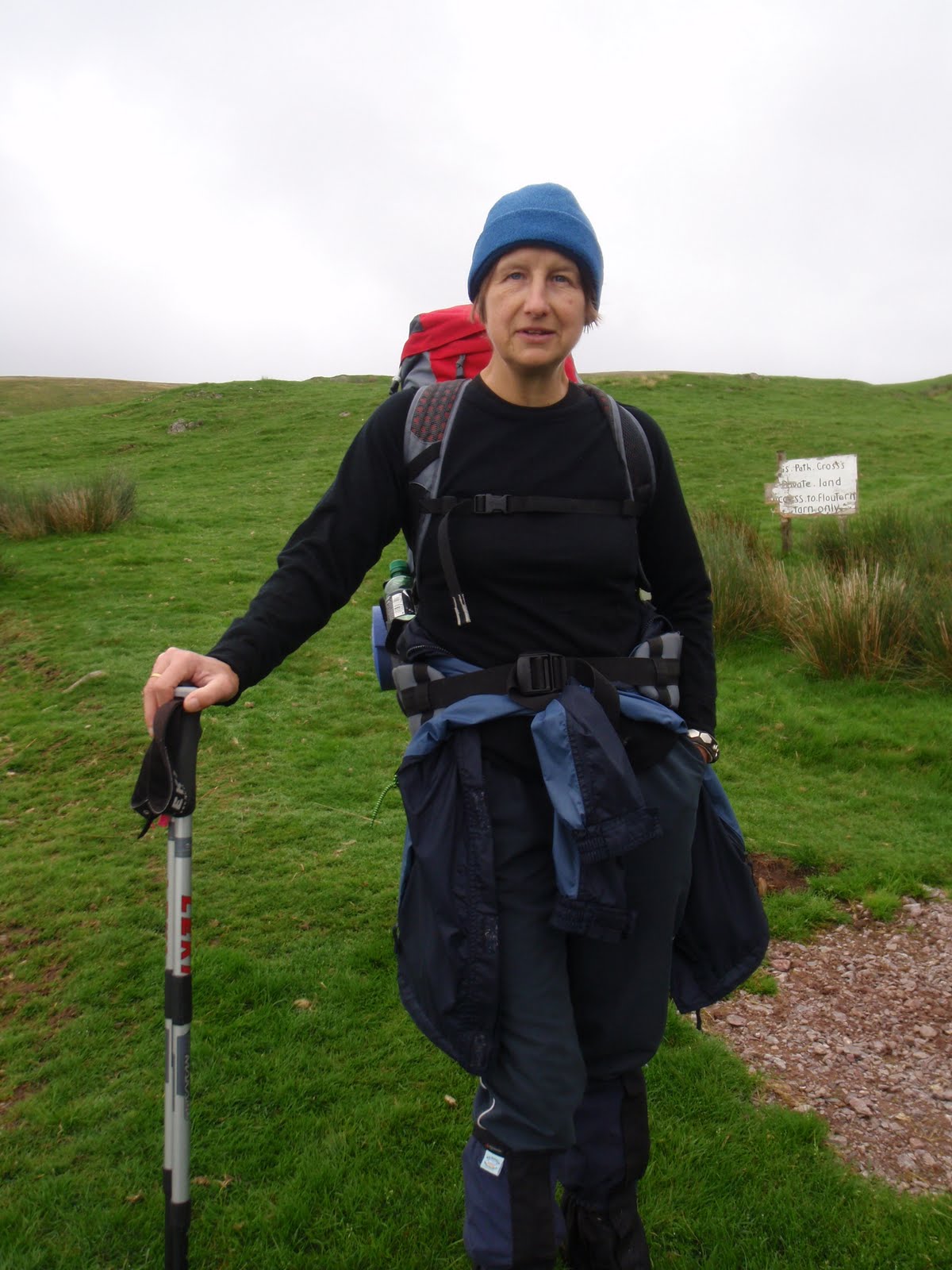 Monday 9th August
Got up at 7.15, had another lovely shower. Breakfast at 8.30, we both had the full English. Not bad and generous but a bit on the greasy side and I wasn’t over fussed on the sausages but admit I am very fussy about sausages and not even sure why I ordered it as don’t usually eat a huge breakfast. I also had melon and cereal and yoghurt. The coffee although real was too weak for me. I paid up and Mr Grumpy Bum still looked surly so we decided we wouldn’t be going back there. Shame, as the location is excellent.
We drove down the Kirkstone Pass to Ambleside, it was incredibly misty so didn’t see a lot. Parked up and went straight to a cafe for me to have my caffeine fix. Then into one or two outdoor gear shops. C bought postcards and stamps. I left my broken watchstrap at a jewellers to be replaced and Nigel said it would be half an hour. He lied and it was nearly an hour which meant we were late back for the car park but lucky as the car parking police were not around. I bought a present for a friend who has a birthday later in the month. C got a pasty for lunch from Greggs. It rained all the time we shopped and then stopped as we drove out to the Wrynose Pass. We tackled the Hard Knott pass too with a few intakes of breath from the passenger seat and my foot down on the very steep bits. Stopped at little car park and walked up to Hard Knott Roman Fort, we lunched on the north wall near the corner lookout. The fort is excellent but we missed the bath house as I’d forgotten to check in Wainwright who mentions it, before walking up. Our original plan had been to climb Hard Knott itself but although we stayed dry there was still a lot of mist coming and going.
We returned back up Hard Knott pass, seems a lot easier going West to East. There was a very irritating gold coloured open top Merc driven by a child with an older male passenger, blasting out loud music and who then got stuck going up Hard Knott so I waited until he had managed to get going again. Then he had stopped for no reason so we passed them and they were behind us. Then they turned round to go the other way. Then they came up behind us again so I pulled in for them to pass and that was the last of them. With luck they had a flat tyre some time soon as they were driving me nuts.
We got back to Ambleside at about 4.30 and then headed for home. Short stop at Lancaster services and home at 6.30. Great break. 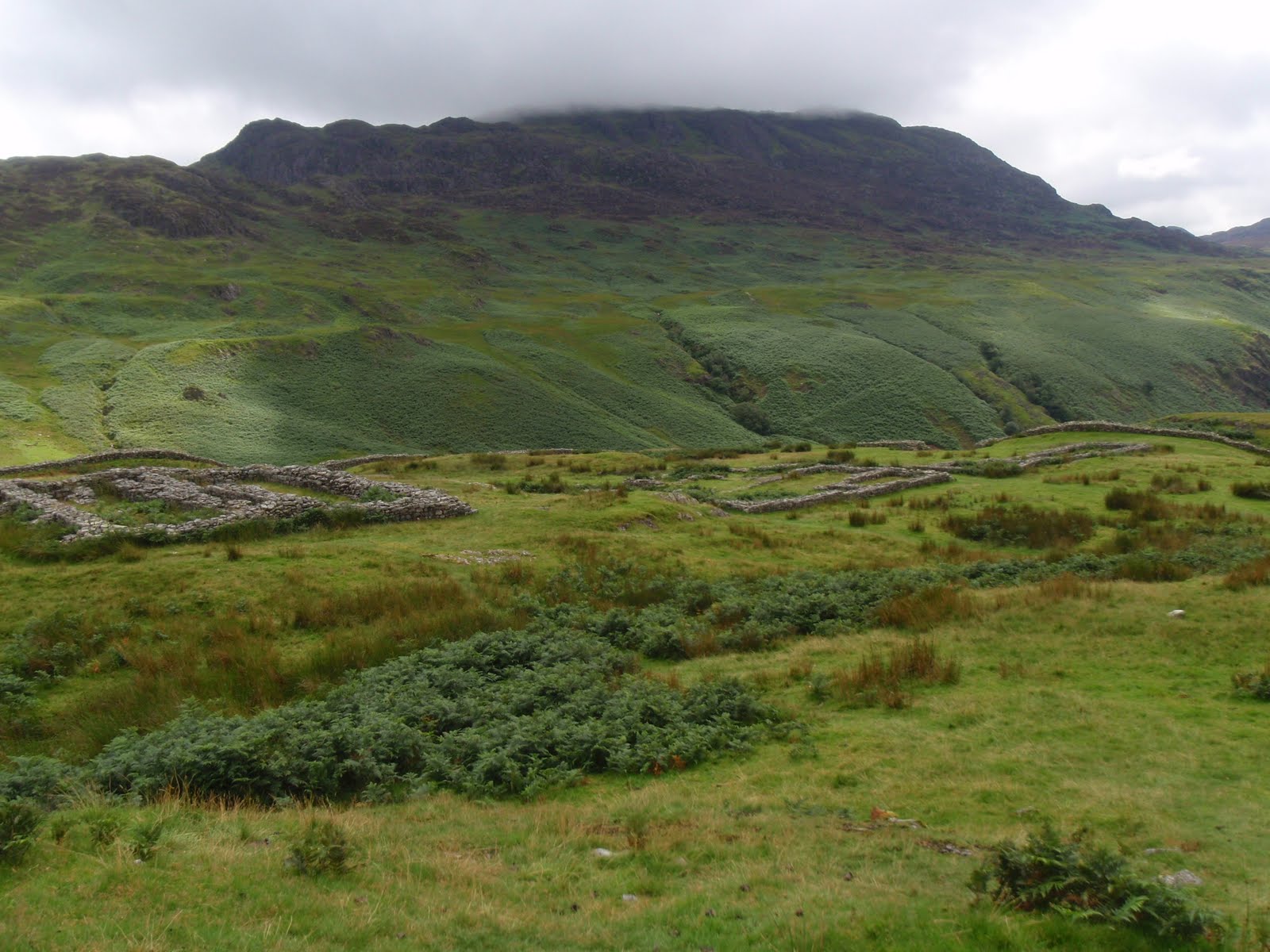