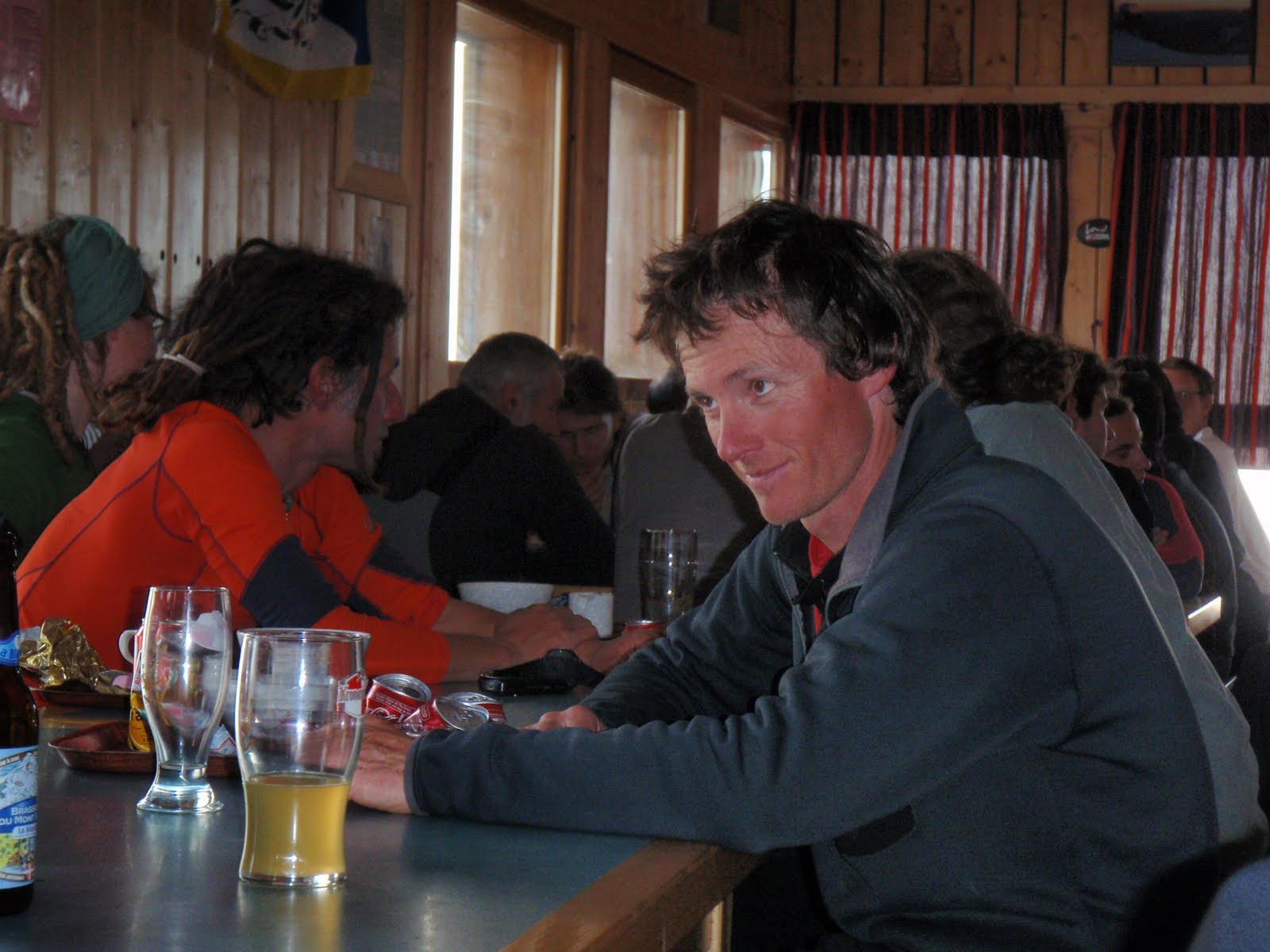 The start of the big one. All our luggage packed up and in the luggage room again. All set for 2 nights away with the absolute minimum of kit. All bags checked by Stephane, more stuff chucked out. Despite S’s small frame, he is immensely strong which is just as well as he has to carry lots of rope and clanking metal.

We have a later start but eventually get going in 2 cars to the supermarket. The boys (guides) amble round and then emerge with melons, grapes and chocolate biccies which is not quite what I would take but hey ho these guys know what they’re doing.
Take the cable car to Les Houches. A short walk to a small train station and then another rack and pinion train for quite a long way up to Le Nid d’Aigle. No aigle in sight just then but I did see one during the week.
The walk begins, a nice mountain walk and quite warm, up to the Tete Rousse refuge. We stop on the way for lunch (all supplied up to this point by the hotel). We are trading food as and when which is nice.
The last part of the 3 hour walk crosses a bit of a glacier. There is a crazy angled outside loo which looks scary but turns out to be a loo of great comfort compared with what comes later.
The refuge is fine and mostly clean but the inside loos are a bit lacking, well there is one. After making a deposit, you press a foot pump which literally takes what you have left along a conveyor belt and out of sight but sadly not out of odour range.
There is electricity (solar) and bottled water at $3.50 for 1.5l. From this point onwards lavatorial matters become an almost constant topic of conversation.
We make our beds, these are all bunks in about 3 or 4 bunk rooms. Ours has about 20 bunks. Duvets, pillows and plastic croc type slippers are provided. There are lockers for kit at $1 returnable.
We get a nice meal, cheese, real refuge made soup, veal casserole, bread plus moussey thing for pudding, all washed down with beer.
Early to bed at 9. Probably a good idea as it’s quite hard to sleep. The other occupants seem to spend the night going in and out, letting the door bang to. Each time the door opens, the stench from the loos wafts in and is enough to make you pass out. It’s quite cold but I soon warm up in the silk sleeping bag and eventually get hot enough to throw everything off. In a waking moment, I design a modification to the sleeping bag so that it will actually hold a pillow in place rather than just cover one which means it moves the moment you do. I feel it’s important not to have any part of my body in contact with sheets and pillow that other people have been in contact with. Not wanting to catch anything if at all possible.
Quite early on I risked a loo break and bumped into Liz, prompting giggles.
I form an attachment to the anti bacterial lotion and the wet wipes!