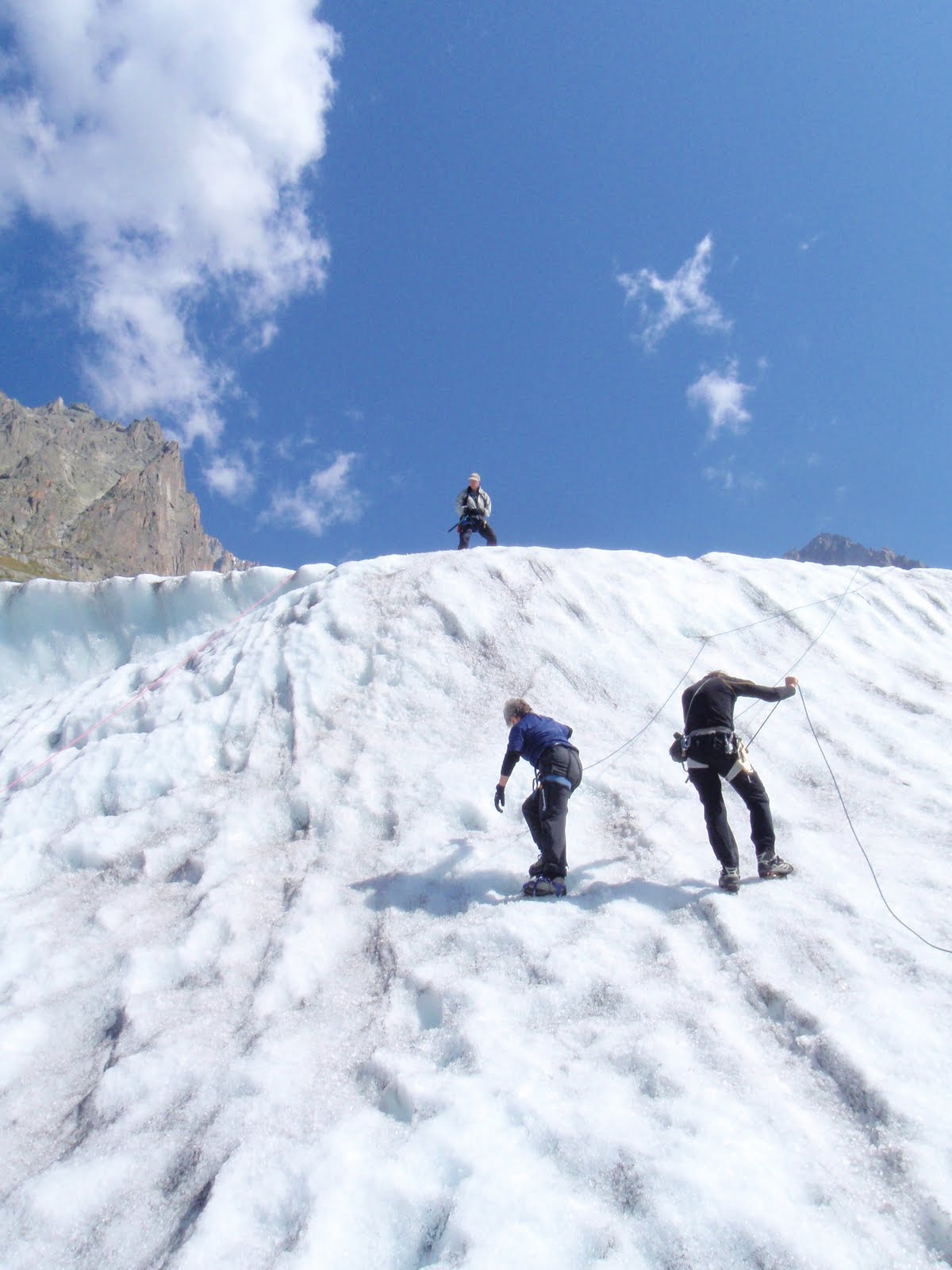 Lots of continental breakfast to sustain us for the day ahead. Into town in Mario’s minibus to a little station to take a little train to Montenvers railway station which gives access to the Mer de Glace. We set off walking in our full winter gear (well I did), plus ice axes, helmets and crampons. After a short walk we came to a sheer cliff face which we descended via about 7 or 8 long ladders. My estimate was that the distance covered by the ladders was about 100m. When I read an article from the Independent (22/08/09) which has a photo of the ladders, the writer reckoned it was 200m. Go to More Photos and scroll through to see the wretched ladders! For me, going down, I quite enjoyed the ladders, it was only later on that I felt differently about them.

A few boulders and then straight onto the glacier. My only previous experience of a glacier was the Jostedal in Norway, which Chris and I just walked on very briefly in our ordinary shoes before a stampede of Japanese tourists arrived. I hope that is the right one!
Getting used to the crampons by tackling shallow slopes and then steeper ones. I do like crampons and feel very secure in them, I had really enjoyed the weekend in the Cairngorms with Chris Conley and Chris H learning to use them.
We moved onto some rope work – this means climbing up a slope using crampons and axe whilst attached to the rope which was attached to a fixed point. Again, this was made gradually steeper until finally we climbed a vertical wall of ice. I just about managed to do this, although did not make a very pretty picture! However the abseiling down was just fab, loved it!
We walked around and into sections of the glacier, wonderful ice formations.
Eventually it was time to return to ascend the cliff. I was very hot, and my pack was full, I also was having a problem balancing as my heel lifts had slipped to the middle of my boots so was pretty much totally out of kilter. Getting up those wretched ladders became a major challenge and there seemed to be many more of them than there had been going down. Both Pierrot and Stephane said my pack was too heavy.
We went back down on the little train and got picked up by Mario after a refreshment stop! A bit later we had our evening meal and then a bit of an old 50s climbing film where men wore corduroys but still dangled upside down from terribly high places.