Friday 19th June
After I’d done half a day of work and Carol simultaneously had done dialysis, we set off for the Duddon Valley and arrived at our designated parking spot in gloomy grey weather but not actually raining.
We walked the half mile to Devoke Water and found that a large school party had already taken up camping residence ahead of us. We hadn’t anticipated this so we retreated around the corner from them and set up below a small rocky hill but still overlooking the lake.
Just as we were getting settled and comfortable the first bunch of teenagers ascended the hill and larked about noisily for ages. They eventually descended and we breathed a sigh of relief. So much for a quiet wild camp to relax in. I cooked up our dinner in my Jetboil (excellent fast cooker), we had chilli con carne and rice.
Then the next bunch of noisy teenagers went up the hill. This was too much so Carol went and asked their minders to deal with them which they did, they actually went down as Carol went off to remonstrance. However this was all a bit stressful and not what either of us wanted. The noise was carrying very clearly as it was a still evening. The first time I went to Devoke Water as a reccy for wild camping, it was lashing down, the second time we both checked it out and it was blowing a gale so very noisy on both those occasions.
At last we were able to get snug in the tent, I drank a mini flask of rum.
Neither of us slept very well, C kept sliding down the tent, she also had restless legs. Not a good mixture! It rained on and off most of the night. 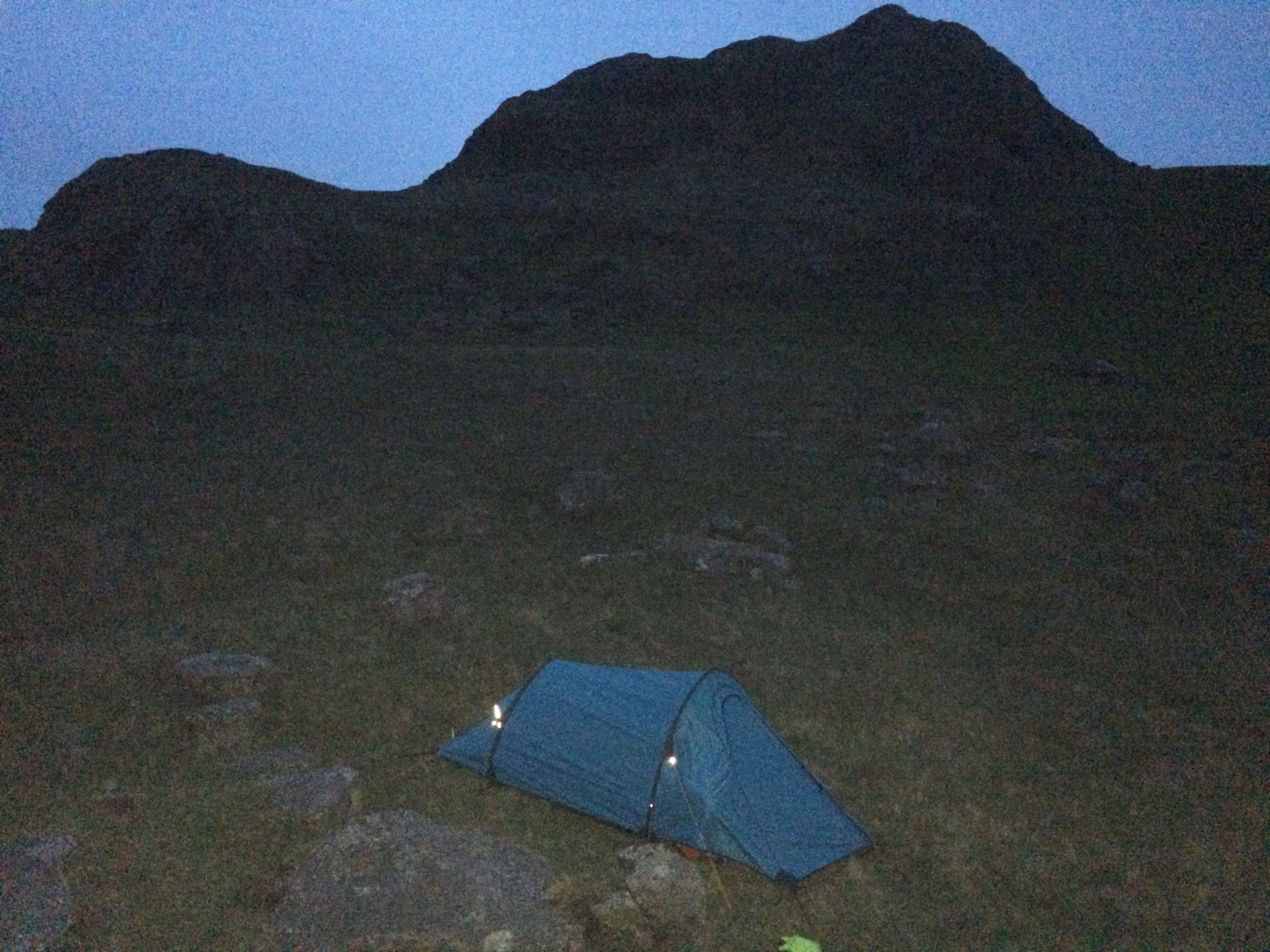 We got up, brewed up (one tea, one filter coffee) and packed up during an interval without rain. Back at the car we drove away from the teachers and parked up on the moor near some large black cows. I made porridge for Carol (instant pot) and brewed up some more hot drinks. Carol has now decided that perhaps wild camping and rotten kidneys don’t really go together so well. However this means that I have to become brave enough to do it on my own, we’ll see…

Into Broughton in Furness to look at the Clocktower Gallery, the bakery and the greengrocers (sells bunches of wild mushrooms, fresh figs and fresh herbs). The rain had just about stopped.

We drove a short distance along the A595 to Broadgate where we parked up. Then a nice trot up a quiet lane to Sunkenkirk stone circle also known as Swinside. We had a picnic on the way in the warm sun, lovely. The stone circle is fairly intact but only accessible on foot as it’s on permitted land on Swinside farm, thus very few visitors. We were the only ones there and we met only one other party on the track.

Then back to the car and off to find our B&B. Wheelgate is in Little Arrow just after Torver on the road to Coniston. Met by Steve and Linda. We were in Derwent which was roomy and quiet despite being near the main road. After we’d got in, scrubbed up and generally stopped looking like tramps, we set off for Broughton Mills and the Blacksmith’s Arms. This was a great find, lovely uneven flagstone floor and black timbers. Also good food and a wonderful local draught lager. Carol had chicken and I had a pea and parmesan risotto. Both meals were great. Recommended!

Back at Wheelgate, in the honesty bar, I had a measure of Bowmore. Yum. 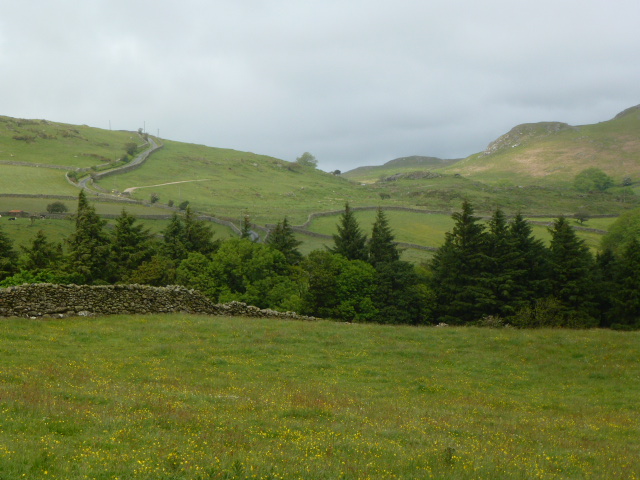 Big breakfasts for both of us. Carol had everything and I had a bit less.

We set off fairly promptly for a jam packed day. First to Corney to look at a tiny little church which has the sea one way and a big fell the other. We looked over and could see the peaks on the Isle of Man.

Then to Ravenglass to see the Roman bath house. It was a bit too open air so I decided not to bother and there wasn’t anywhere to put my towel apart from a niche but Carol said the niche was for a statue and not for my towel.

Onwards to Eskdale where we had our lunch by the side of the road. We then started up the Hardknott pass and came to a pub where an old chap waved us to stop. He needed a lift up the pass as his car had 2 blow outs and was in a passing place on the pass with his wife and one friend in it. He’d left another friend at the pub but wanted to take sandwiches and supplies up to the two women in the car who were waiting for the breakdown vehicle. We took him up to his car which was beyond where we were planning to park ours at Hardknott fort. So I did a 3 point turn on the Hardknott pass (Carol stayed relatively calm during this procedure) and took the car back to our park spot. For anyone who has not driven the Hardknott and/or Wrynose pass/es, it/they are not for the faint hearted. Many moments where you cannot actually see where to point the car because of the extreme drops. We then walked back up past our new pals and up to the top of the pass to find the “pile of stones”. Then we tackled Hardknott fell. Carol did this very well. I was slightly anxious as Wainwright had intimated that it had an indistinct ridge, that it was hard to get back down and made mention of a scree slope. Well it wasn’t and didn’t have any of those things. This is my 71st Wainwright so I’ve very nearly done one third of the 214. As we got back to the road, it started to rain heavily so we togged up. Back down the road, our pals had gone so I’m glad they were rescued, they were in the midst of clearing an elderly relation’s house and their 2 friends had come over for the weekend to give them some down time and then they’d had the breakdown so it had all been a bit tough for them.

Before heading for home, we had a quick look at the fort and trotted round the outside. Also looked at the bath house. This one has cold, medium and hot rooms plus a round sauna. Again, I decided not to as it was a bit nippy and we had to get back for our supper.

We went back to Eskdale Green and up over the moor passing where we had parked for Devoke Water. Managed to get back in good time for some non Roman showering. Steve and Linda provide complimentary sherry for guests so I had a very good dry one, lovely.

Then just down the road to the Wilson’s Arms in Torver. This was ok but Carol wasn’t really needing a huge meal and there wasn’t much she fancied. She ended up with a small portion of gammon with lots of grilled things but even so it still looked like an enormous portion. Thankfully it came at a smaller price. I had risotto balls. So yes risotto two nights running but I like risotto and these were very good. Beer was called Barngate Cracker. Ok but not as nice as that draught lager which I foolishly didn’t make a note of.

Aberlour from the honesty bar, such a fab idea, also a great little room with beaten copper topped tables. Still light at 10.50, wow! 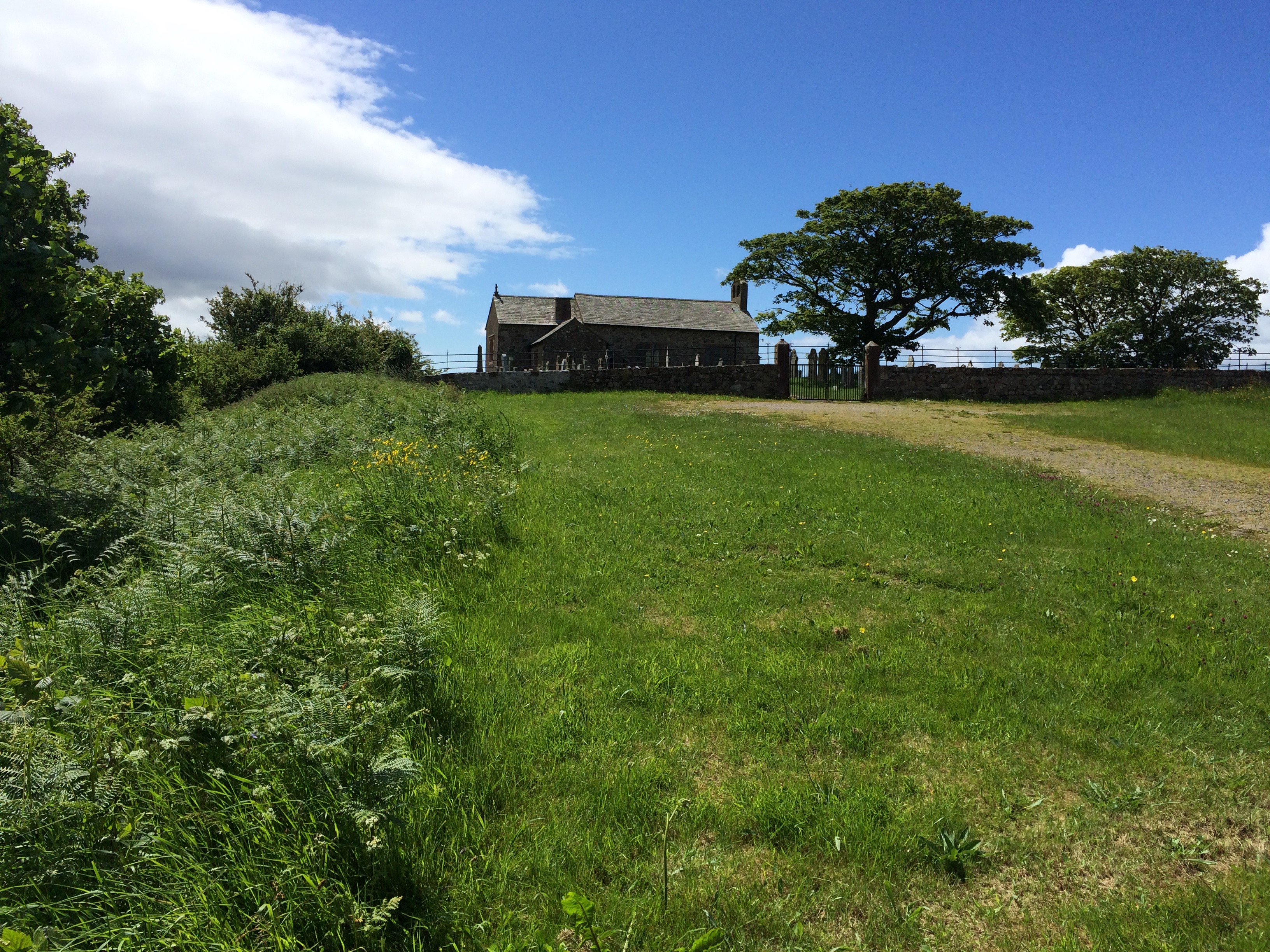 Carol enjoyed another large breakfast but I just had muesli with fresh fruit and yoghurt and a poached egg on toast. We packed up and headed off after a nice chat with Laurie, a fellow guest from Essex. Wheelgate is a great B&B and we are both hoping to go back there. They also have a single room in the main house plus a single in a separate building at the back.

We looked into the Deli attached to the Wilson’s Arms but it seemed to have reduced its stock since I last went in about a year ago so we didn’t linger. Into Coniston for a quick look round and then back home via the Windermere ferry. Back by 2.30 to get all the gear sorted and Carol on the machine.