I decided to do another of the AA Walks, this one from Lydgate to the Whirlaw Stones, the Bride Stones, the Hawk Stones and the Orchan Stones. I’ve done some of this with Cath and also most of it with Chris who loved it.

The AA description is a bit out of date. I’ve sent them some amendments so hopefully they will update it on the web, they make a lot of reference to the Sportsmans pub which is long shut. The first hurdle was a very overgrown path in Lydgate but I reported this to the Ramblers via the Pathwatch app which sends the Ramblers a grid reference and a photo which they then send to the relevant local council.

It was pretty hot but the first section is nice and shady, the path is no longer sunken but a concrete track and very steep. Into the sun and then yet another dead sheep, this one very smelly and with lots of flies. I walked under the Whirlaw Rocks and sat on a bench to eat my lunch. Then up a bit more, past Windy Harbour and the stone head, past a new build called Mast Farm but no mast in sight and definitely not where the map was saying it was. Up onto the Bride Stones where someone was drumming in a cleft in the rocks. Across to the non pub and along the road passing the Hawk Stones on the right. Down Mount Road, past a very ancient stone cross that I don’t remember seeing before but maybe I just wasn’t looking. Along a section that the AA needed to explain in a bit more detail. Then down past the Orchan Rocks and back down another shady wide track to Lydgate.

Brass monkeys. So cold I feared for my toes.
The idea of the Valley of Lights, as well as being fun and a nice thing to do before Christmas, is to give support to all the local businesses affected by the terrible amounts of flooding in the summer.
I parked in Mytholmroyd at Russell Dean or Pearl and Dean in my head and then managed to miss the train because I thought it went at 5.35 but actually it was 5.25.
Still the 6.05 turned up on time despite alerts to the contrary and 10 mins later I was in Todmorden. Chris arrived as I came out of the station having had a free ride and we pedalled off to the high school gym where we registered, picked up snacks and drinks and more lights for our bikes which were being dished out by David Dodwell, lovely to see him again, he was a marshall.
This was all a bit rushed and then we went to Bramsche Square to assemble all lit up.
About 100 of us set off with a car and Mountain Rescue in front setting the (very slow) pace.
We stopped at the big lay by for a couple of mins and then went on to the JCB park where we had a long wait. Our feet and hands were alternately freezing. I had a wee behind a JCB and the steam rose up! No time for one before!
It was well below freezing as cars we passed were iced up.
Finally got going to roll down into Hebden. We were cheered all the way by the crowds which was very sweet especially as we didn’t really do much. It brought a smile to my face instead of the cold face of pain! We made as much noise as possible with our bells and whooped too.
Stopped for 5 mins then off to the Dusty Miller in Mytholmroyd. We had some beer and snacks. I could have done with hot soup but the DM not yet ready for business so not an option. Chris chatted to MR friend who was with her teenage son who Chris had delivered.
Then we got the bikes in and on the car reasonably efficiently and I went home via Walsden. After unloading at my end I had hot chocolate with rum in it and went to bed with a hot water bottle. 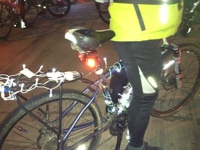 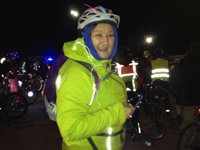 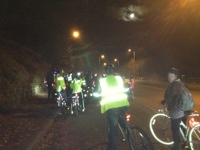 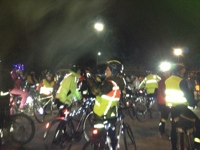