Skip to content
Friday
Set off at 2.30 and meandered our way to Keighley where I bought Optrex for one of Carol’s ailments. It took forever in dithery Friday traffic to get to Ravenstonedale partly because of an excessive monsoony downpour which came north with us causing lots of standing water and some mini floods, the worst of which was 2 mins from our destination at High Chapel House. That sentence is long enough to challenge Lucy Mangan!
We settled in to the same room I had when I came here back in April. The rain had now stopped so off to Kirkby Stephen to the Old Forge for dinner. I had lamb koftas and chick peas for a starter – very tasty. Followed by pea risotto while Carol had pork escalopes with black pudding mousse with honey and mustard sauce. All served up with mashed spuds, mashed swedes and leeks with peas and chips in case anyone had room for them. All very good fare. This resto is recommended!
Saturday
Both very hot in the night. Brilliant powerful shower. Breakfast was cooked by John as Yelly was out doing a cookery demo at a nearby country show or fair. Full English for C and omelette for me. Just for a change it was very wet so we went into Kirkby Stephen which was having a horse fair. This meant it was hard to park and the town was full of rough looking horse traders. Went round the whole town and stopped for a coffee in the post office and deli. C was the one on coffee and me on tea so a bit of reversal there. I sniffed Carol’s Americano but still didn’t want it. It’s a bit like giving up fags as I think I should be having coffee. Then the rain actually stopped and we decided to give our walk a go so back to Ravenstonedale to park near the school and get fully togged up against the wet and off across the field to the main road. We followed a track and then charged up over pillow mounds, through a herd of non combattant cows and down to Smardale bridge hearing the sound of a hunt all the while.
From the bridge through some old quarry pits along an exposed section and up to Smardale Gill viaduct. It was well into the afternoon so I had my pork and apple pie and C a ham sandwich with some of my best flapjack.
Across the viaduct and along the old railway track, through some mud and down to a fast flowing section of Scandal Beck at Smardale bridge. We managed to get across and then I remembered we were going back a slightly different way so back through the river again!
Various muddy bits but soon back in Ravenstonedale in time to freshen up before going out to the Cross Keys near Cautley Spout.
The Cross Keys is a temperance inn and is run by Alan and Chrstine who are Quakers. No corkage charge so C provided a nice bottle of Fitou. Great coal and wood fire blazing in the range in the sitting room.
I had mozzarella and sun dried tomatoes in filo parcels followed by steak with onions and mushrooms with mixed roast veg and potato wedges – they make a point of telling you they don’t serve chips but the wedges are the thick end of. I finished off with crunchy caramel ice cream. C had a stack of chicken and bacon followed by crundle which is like cake with jam and cream. It was all very nice indeed.
I was pleased to see Alan he is a proper maitre d’ and comes to see each table is ok. We sat briefly in the sitting room then paid up and said goodbye to Christine. They both said they remembered me from April.
Home to finish off the bottle. Oh and raining again. We have now met the entire family at High Chapel House. 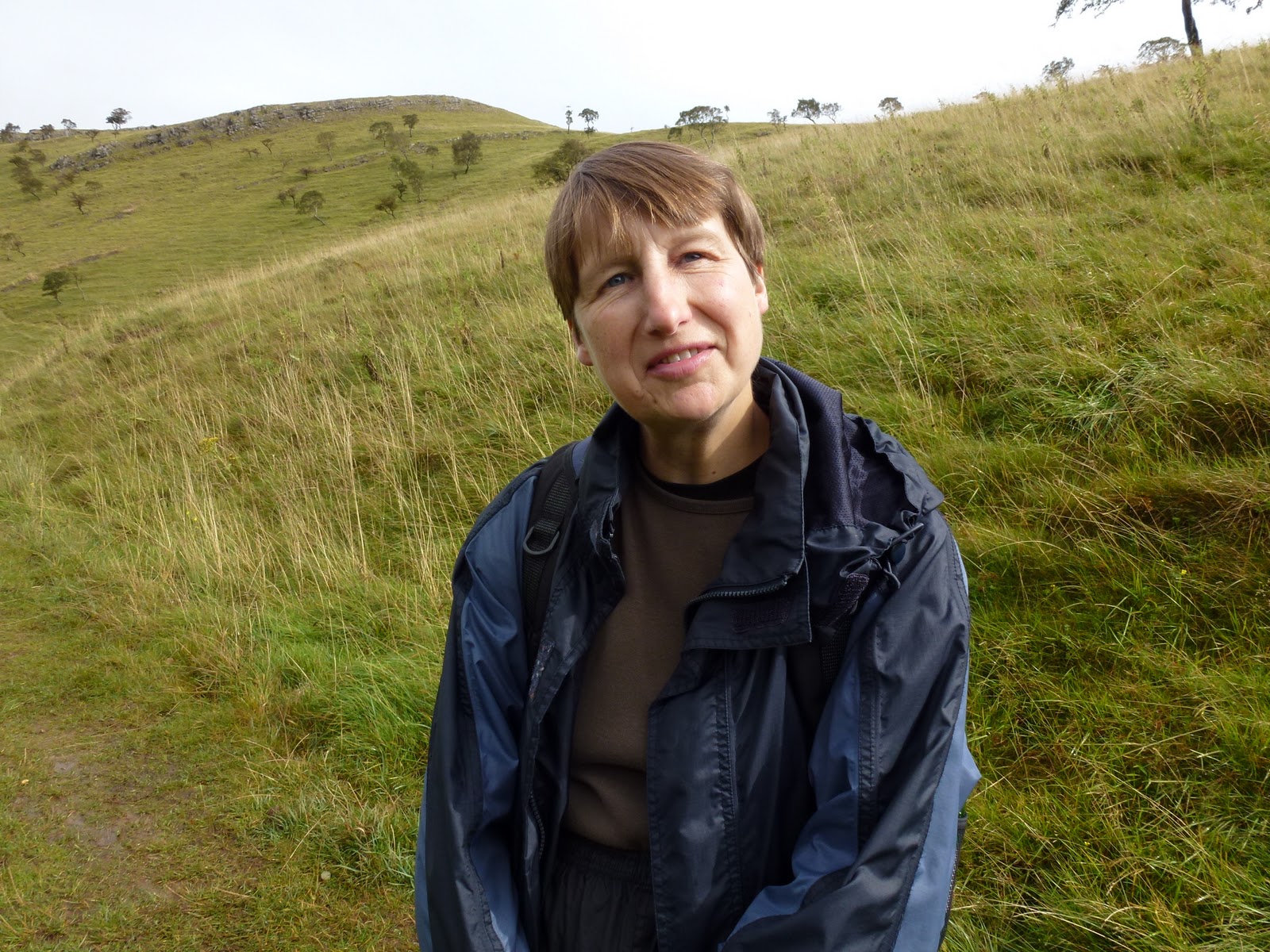 Sunday
Yelly was on breakfast duty today. I had the full English without the black pudding and Carol had scrambled egg and smoked salmon. I haven’t told C how I feel about scrambled eggs but it is quite a violent antipathy.
We packed up and wanted to take advantage of the lack of current rain so managed to get out early. Drove just a few miles to park in an old quarry and then walked up to Fell End Clouds which is a lovely walk ambling through limestone moraine and then bits of limestone pavement. We’d picked a lower level walk in case of more rain but it stayed fine and took us up high enough to get good views across to Wild Boar Fell which still draws me to it. We found Wainwright’s “conspicuous, solitary tree” and wandered back to the road passing 2 old lime kilns.
Then to Sedbergh for a bit of book shopping, grabbed a bread roll in Spar and off on a very quiet single track road to Dent. Stopped a bit further on next to a gushing waterfall to eat our lunches, it now being mid afternoon. Then continued on this road a little way and then I realised it was Whernside on our left and we passed where I’d climbed it from on my super fast ascent a year ago Easter.
From there it was a straight drive back to Ingleton and the main road home. And it didn’t rain on us all day. Super.

A leisurely start to my 4 day trip to the Howgills and Dales. I parked at the Cross Keys Temperance Inn (more on this later). I was feeling tired despite the regular exercise and a good sleep so looked at the Spout which seemed to be spouting about half way up the cliff and decided just to go up and see it close to and then return. The Spout actually starts at the top of the cliff. It was a situation where I thought I would just go a little bit further and then a bit more. Once I was at the top about 600m I continued along the path of Red Gill Beck. When I checked the map it seemed pointless to come all this way and not go to the Calf. So I carried on up the side of Force Gill Beck. At the top of the beck I saw the only people on the walk. They had passed me as I ate my lunch and come up widdershins to my clockwise route. I trotted up to the Calf. Still fine but very cold in the wind. I was glad of my new Millet, not Millets jacket and also new Smartwool merino socks. Excellent. Jacket light as feather and kept me warm. I rang my B&B with ETA from the Calf as good signal. On the map to get down you have to go over a kilometre and then turn back on yourself. I could see the path I wanted so did a short cut by the side of a beck. Then it was a short descent to the plain where there are remains of an Iron Age settlement.

I drove up to High Chapel House in Ravenstonedale pronounced Rissendall of course. Yelly very welcoming. Nice comfy billet.
Walked down to Black Swan and had olives and feta cheese then Tuscan chicken which was ok not madly brilliant and enormous portion so I could not eat it all.
500m ascent
8km