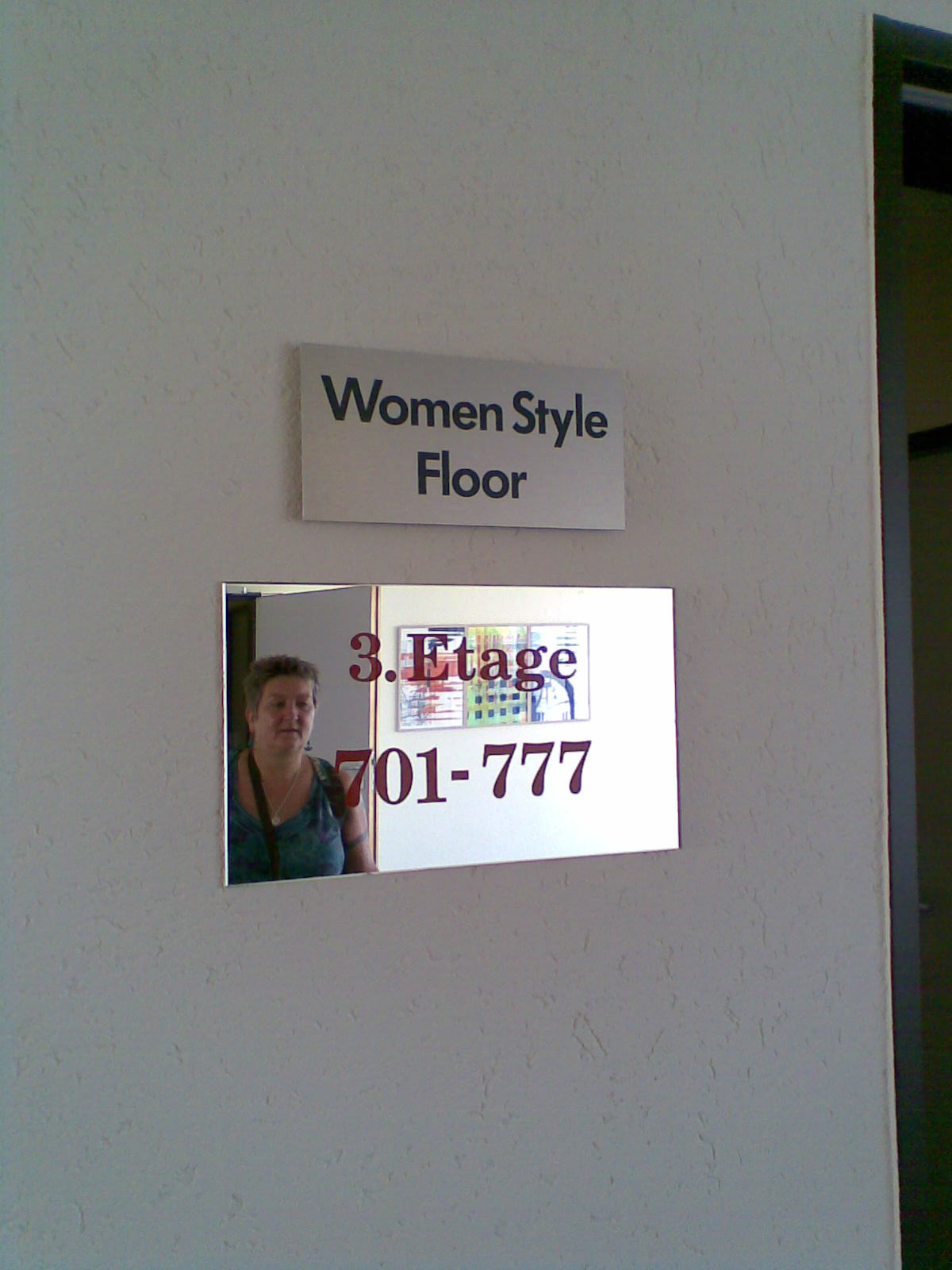 We never did work out what the Women Style was!

Saturday morning woke up having left the curtain open all night, still very hot even though we also left the air con on all night.
Went for sumptuous breakfast, had everything nearly. Muesli, yoghurt, fresh fruit, dried fruit, croissants, bread (bit dry), hams, salamis, cheeses, jams, horseradish (yes), eggs, fried stuff….cakes (resisted).
Took some processed packed things for later hunger attacks. Oh and 2 hot, hot, hot boiled eggs.
Checked out and rode the rails again into Frankfurt. The train made us get off at the airport and whilst we were waiting for the next one, C raced off to get a “bottle of pop”. Expecting her to return with cola etc., she totally surprised me with a bottle of Pikkolo fizzy wine. And very nice it was too. After buggering about at the main station for a little while, decided to go straight to Koenigstein and get into the country air. I think it was this time we stopped for a little coffee and a almond croissant (me) choc (C).
Took the train to Koenigstein, lovely air conned train at last, out into the country. Passed lots of allotment looking gardens. Mostly very flat around the city with various factories including Coca Cola, then more agriculture. Started to rise a bit, went through nice looking well off suburbs and after 40 mins arrived in Koenigstein.
We knew that the Cafe was only 50 metres from the station but we took a slightly longer route to get to it, however avoiding the steps.
Got to the Cafe Haerdtlein, at first the woman didn’t seem to have us down but then she found us. All the bookings I had done were in Chris’ name as she comes first in the alphabet, slightly disconcerting when the ID is the credit card!!
The Cafe H is an eclectic mix of styles, some hideous and some frankly disturbing but quite cheery. Nothing has ever been thrown away.
The room was fine and comfortable although it didn’t ever really get cool.
Chris went off to the supermarket to get some supplies as it shut on Sundays. Stocked up on water.
We were going to try and get some tourist info e.g. a town map but upon asking in the kiosk across the road, a rather nice young man (mine, I think) told us the Tourist Info would be shut and he gave us directions on how to get to the open air pool.
So off we went through the houses and then out onto a country lane, past fields of wheat. Through some trees and there we were. Only E3 to get in, the pool was quite busy as it was a hot Saturday afternoon, lots of families with well behaved children. Worked out all the lockers and systems. Straight in and it was VERY cold water on our HOT bodies. Had lovely swim and dried in the sun. C did some long lengths, the pool seemed immensely long and wide to me. C had a tuna sandwich that looked a bit odd.
After a bit we wended our way along the railway track (single track through the trees) then via the town to the hotel. Stopped at the supermarket to get lunch for next day, ham and cheese.
Another change of clothing and another underwear washing spree and off to get some food, I was kill hungry by this point as had not been fed properly since breakfast, having turned down the weird looking food at the pool.
We saw some nice but rather expensive restaurants along the way, including a dear little Italian one with trees all round it.
Then we found a nice one with green seats and sat outside. C had pasta with salmon and I had mixed roast veg and cous cous which was totally totally delicious. There was also a cocktail (C) and a glass of local cider, very nice.
Then back to sleep, sleep, sleep some more.

One thought on “Frankfurt and Koenigstein Saturday July 4th 2009”