After a reasonably early but chilly start (had to scrape the ice off the outside and the INSIDE of my car windows), Chris and I got to Langdale, parked up in practically the last spot in the National Trust car park, saving £6.50 and set off at about 11.20.
Across a big flat section full of sheep, black, white and punk; cows, horses… to the charmingly named Stool End Farm, turning left to go along the side of the beck and then across to start the climb up to Great Knott.

We stopped below the Knott on the col for a quick pre lunch snack, Chris on pork pie and me on energy bar and organic fruit and nuts that were mainly nuts until I supplemented them. Then up past the Knott and our first close up of the Crinkles, at this point they seemed quite fun and exciting.
We scrambled up the first Crinkle, and even then we wondered how many there were, Chris reckoned 4 and I was thinking 5 or 6, having consulted Wainwright during our coffee break on the drive over. However my consultations were more about how to get round or over the Bad Step and I now know there are 5 crinkles. Very hard to pull out of the map as the distances are so small, even with a magnifier.
We lunched just before starting crinkle number 2 and picked the coldest, windiest spot on the walk. We watched a large group trying to get down the Bad Step and worked out that we would just skip up the side as totally unnecessary to do the Step. That said, it would be a good place to practice rope work.

By then, we’d got tired of Crinkles as there’s an awful lot of up and down and very little distance covered. A mere 3 more to do but we battled on and got to Three Tarns where we decided to return down The Band and not down Hell Gill which had been the original plan. We were both tired and needed a relatively easy and straightforward route. The path seems to have been improved since I last did it as I remembered quite a lot of hands on sections but these weren’t there any more.
Finally got back to Stool End and Chris took off on the tarmac, back to the pub for the facilities and a beer for Chris.
We whizzed home and I even got back in time for Downton Abbey! Oh dear, how very tragic! 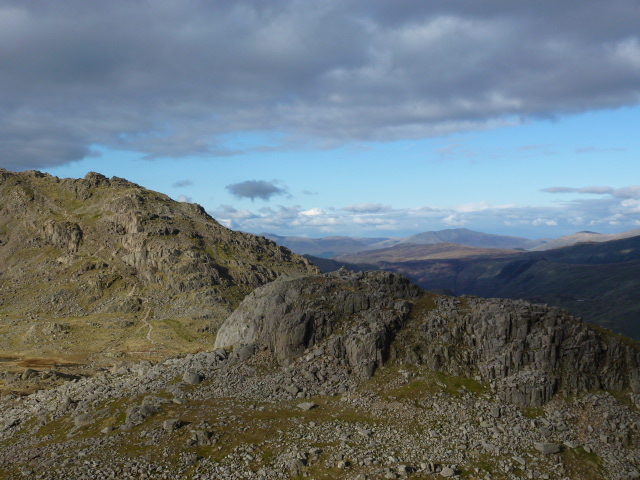