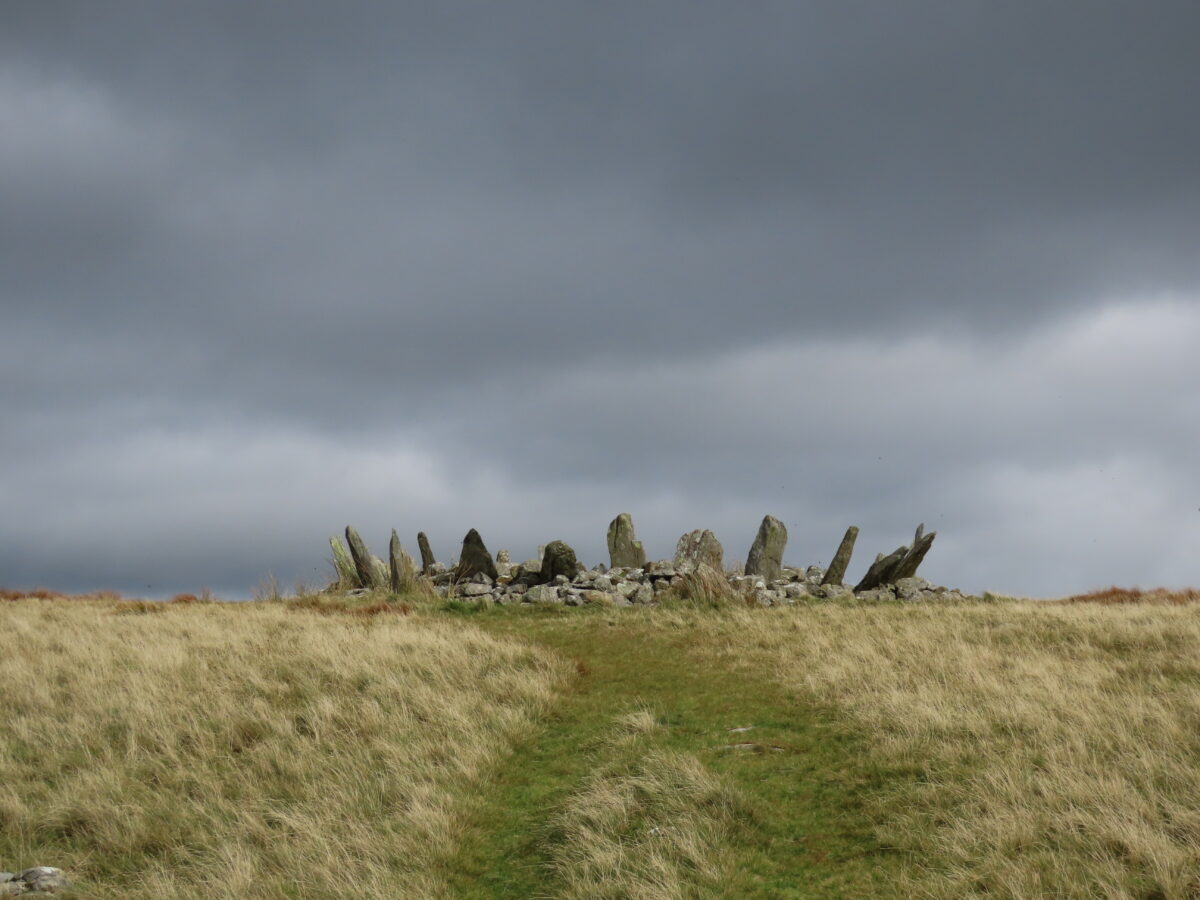 I booked this short break when Carol was still alive. Arrived at Craflwyn Hall mid afternoon, staying in the stables again, a different stall from the last time I was there. That time I sustained an injury to my elbow and Carol looked after me from a distance, sorted out a GP appointment for me. Dinner was tapas which I enjoyed but some of the other guests didn’t. Some people are so gobby! Entertainment was a word square game. The team I was in won.

Drove to Trawsfynydd which is mostly known for its ex nuclear power station. It was opened in 1965 after 6 years of building. Remained in operation until 1991. It will take 100 years to decommission. Just above it is Tomen y Mur Roman fort and small amphitheatre which was built in the first century and in operation for at least a hundred years and is still very evident on the ground but a hell of a lot less poisonous. After climbing the Norman motte and bimbling about I drove south from Talsarnau up tiny roads with green down the middle and branches hitting the car, out and in for a gate, continuing until the road stopped. Walked roughly 3 km along a fairly good level path, soggy and squelchy in places, to reach Bryn Cader Faner stone circle which was a delight (GR SH 64796 35329). Back the same way. This time I met a farm truck and a van coming up so I had to reverse quite a way. The evening entertainment was Benjie and Mev who are local birds of prey experts, not a C&W duo. They were knowledgeable and interesting.

Car free day. Walked from the house straight up the hill behind, which is the lower slopes of Yr Aran, a sub peak of Snowdon. A nice mountain walk without going very high. Passed old mine. Some boggy bits. Eventually joined up with the Watkin path. Stopped in Caffi Gwynant for a coffee and a scone. Walked back to the house along the east side of Llyn Dinas on a very good well made path. Only one heavy shower early on. Sunny mostly. Unfortunately the best photos of the walk past Llyn Dinas were corrupted. Another very irritating woman staying here. I’m getting good at walking away. Entertainment was the quiz. My team came second. There are 31 guests in the house, some of whom are Brexiteers, some think it’s ok to make “jokes” about sexual violence, one thinks bereavement is the same as divorce and at least 7 who are decent human beings with respect for others and a developed sense of right and wrong. I have trouble with those who lack self awareness. I don’t expect everyone to be emotionally tip top all the time but I do think people could develop their interpersonal skills before letting themselves out of the house. My best shirt is wasted on them.

Leisurely breakfast. Heavy rain expected so I drove quite a way to a National Trust property, Plas yn Rhiw. I’ve really had my money’s worth out of the NT membership fee this year, at least twice over, if not more. Makes up for the years when all I did was park the car. It was a nice little house previously owned by the 3 Keating sisters who were an interesting bunch and rebuilt this house in a stunning location looking out across the bay. Then the rain came, on and off. Had my lunch in the car. Went and looked out over to Bardsey island. Through a torrential downpour to Betws y Coed to see if there were any outdoor kit bargains, there weren’t. The rain settled in heavily. The mental and emotional toll of grief is obvious but I hadn’t even considered the physical aspects, the sapping of energy, lethargy, continued poor sleep, fatigue, reduced muscle strength, low stamina. I am working on all of these. Feels like slow progress. At least my left leg muscles match the right leg, 6 months later.

To Llannymawddwy through more downpours. However they more or less stopped as I parked up. This is a place Carol and I went to several times (misnamed by me as Pennant in that blog post) when we used to stay at Llanfechain. Carol liked it because we could be in the mountains without having to actually climb one. It’s a gentle walk up to a col, about 100m of up to 1 km of length. We never saw anyone else and I didn’t today. We last went there in March 2015, after getting our civil partnership upgrade. I buried some more of Carol’s ashes at the col overlooking the east valley. It’s such a lovely spot, with valleys east and west. Constant sound of tumbling waterfalls. Back at the car, the rain came on again. I decided it would be ok to do the mountain road and it was though I was cautious through the flooded bits. The really scary bit of road has had big new barriers put up which I was grateful for. Round Lake Vyrnwy and then to Oswestry to get some veg. On the spur of the moment I stopped at Chirk Castle, knocking up yet another National Trust property visited this year. I got wet because I’d failed to take my brolly. It took a long time to get home because of the terrible weather.